Modern science says about gameplay as a way to learn to control our attention – which is also one of the primary aims of Buddhist philosophy, but Buddha believed that games are waste of time because you need to be focused on your way of knowing all time.

The way of knowing. Is there any certain way to acquire true knowledge? Can we reach it with a lifetime experience or through another people? Can Buddha decide what I have to focus on?  Can we reach the true knowledge only with questioning?… How can I collect the naked knowledge which is not affected by any kind of externals? By logical thinking?

Pure logical thinking cannot yield us any knowledge of the empirical world; all knowledge of reality starts from experience and ends in it. – Albert Einstein

So okay, we need to do experiments for enlightenment but how? The method we should use for acquiring absolute information is our key in there. We all born near that enlightenment door and some people think we shouldn’t enter because it can be forbidden. Some others say I can’t see any kind of key in my pocket so opening that door is not my mission, and the fewer others still searching that key.

Enlightenment is man’s release from his self-incurred tutelage. – Immanuel Kant

Now, let’s start with searching that key. Did you double-check your pockets? What if the key we are looking for is just us? We all socially connected and slowly shaping our environments right? So, if we can do social experiments with true methods, we can understand all the human beings, other livings, the universe and the more important one, our existence.

From this point, do you think our experimental subtitles should be strict like Buddha? If we can shut down all game industry or other ‘distractions’, the world would be a better place? OR if we have forbidden anything from our world,  we lose one of our information source and causality behind it? I hope we all think the same.

With an example; TPP – Twitch Plays Pokémon is a ‘social experiment’ on the video streaming website Twitch, which all players try to play Nintendo’s first ever game Pokémon Red,  altogether by parsing commands sent by users through the channel’s chat room. Twitch estimated that over 1.16 million people participated and with a total of 55 million views during the experiment in 2014. The good thing is, nobody knows that this is an experiment. 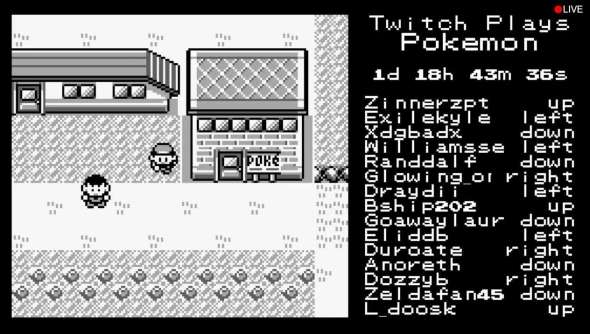 Basically, in the game, the player progresses through many battles, puzzles, and challenges to become the Pokémon Champion. These obstacles are manageable with one player, but the simplest actions become more complicated as more players join and input their own commands in one single game. So there is where the anarchy starts.

An early development in the game introduced a scale that measures the players’ desire for democracy relative to anarchy. Users can vote for either game mode in the chat window. Under anarchy, all inputs are received and executed by the emulator in sequence, which often results in chaos and confusion. One wrong input could prove disastrous, making this mode dangerous in several situations. Under this mode, cutting a tree that blocked the path to a gym leader (something that normally takes no more than 20 seconds) took over four hours to execute because of coordination failures.

Under democracy, inputs are tallied up over the course of 20 seconds and the command with the most votes is executed. This leads to slow gameplay, however, it becomes more efficient at times and people thinks that it’s perfect to eliminate ‘start9’ anarchists – if someone type ‘start9’ command to the chat, the game pauses and started nine times in a row.

At this point, there are two main ideologies about the game’s future. One group states, because of the anarchists this game will never be finished. And the others think that this is related with Infinite Monkey Theorem, that’s why we can do it.

The infinite monkey theorem states that a monkey hitting keys at random on a typewriter keyboard for an infinite amount of time will almost surely type complete works of William Shakespeare.

With these endless discussions, something unexpected happened: Democracy, though amenable to strategizing, can have a dark side as well. Much like domestic and international politics, democracy in its purest form is still corruptible by ‘motivated forces’ – Michael Aiken. Theoretically, with enough organization, a user with hundreds of followers could severely damage Red’s progress and chances of finishing his quest. And that is exactly what happened, on a day named by the fan-base as “Bloody Sunday.” A spam attack occurred at 5 AM EST on February 23rd, in which hundreds of Twitch users swung the political meter toward democracy; led by a Twitch streamer Destiny, their intent was to hijack control of the game by spamming commands to deposit and release as many of Red’s Pokémon as possible. The main target was “Bird Jesus,” Red’s best Pokémon and one of the de facto symbols of anarchy and the much-loved subject of hundreds of internet memes. And with this attack, we all observe the true damage of democracy.

So, we naturally watch over the democracy can be more dangerous than anarchy itself.

On 1 March 2014, the game was completed after more than 16 continuous days of gameplay and I hope we always remember this experiment with not only the anarchists’ attacks also the democracy’s dark sides.

At this experiment, the main goal for me is not the result anyway. It’s the method. If we are seeking the true knowledge, we have to observe it in their own habitat and every kind of habitat is important for the human existence. Who would have ever guessed that gamers can enlighten the political ideologies? Also if the people knew they were tested, I don’t think we can observe any realistic outputs like those…

If I curse pedophilia to a pedophile man, can he confess he is also one of them? Or he just keeps cursing with me? Most social acts have to be understood in their setting and lose meaning if isolated. –Soloman Asch

McGonigal, Jane. SuperBetter: A Revolutionary Approach to Getting Stronger, Happier, Braver and More Resilient–Powered by the Science of Games, p. 40 (Penguin 2015).